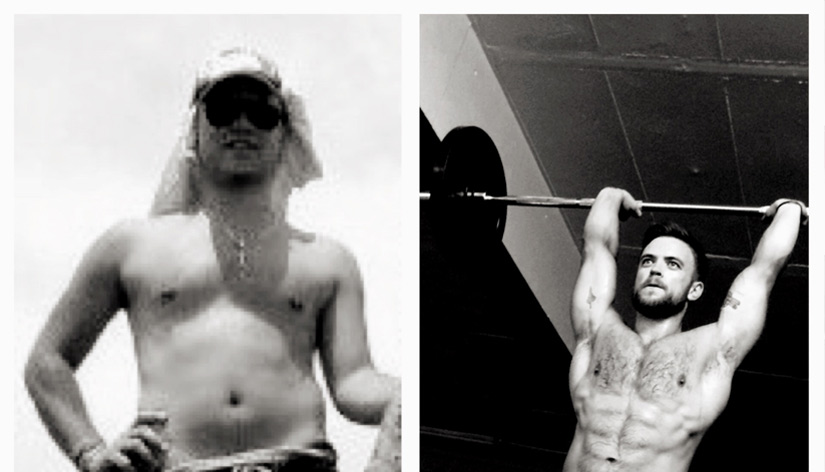 What I love about hiking is how simple it is. You put one foot in front of the other and deal with each obstacle and ascent as it appears.

You’re focused on what’s coming next and what is left to conquer. This drive to keep moving forward means that we don’t often turn around to realise how far we’ve come – to admire the view, so to speak. I guess the tenuous comparison I am trying to make is that the same can be said for personal progress.

James asked me to write something about my journey, so I took this opportunity to reflect and look back on the route I had taken to get to where I am today.

At school, physical education was something I resented. I hated the sweating. I hated the suffering. I hated being the worst at everything we had to do. I was great at making myself the joke of physical activity though. This was an all too transparent attempt to deflect attention away from how bad I was at it. Most memorably, my first attempt at high jump ended by theatrically jumping under the bar and landing with a great flourish. Everyone laughed. I got up, shrugged, and was not expected to do much else that lesson.

At university, having shaken off the shackles of weekly physical education, I decided that an approach to a balanced diet was a R5 spring roll, a Chelsea bun and a half litre of milk. I thought nothing of stopping in at a petrol station on my way home for a packet of crisps and a chocolate. This very serious approach to nutrition persisted for most of my time on campus and the result was a soft bodied 82kg twenty year old who thought he looked fine and that exercise was for jocks – not for sensitive, analytically minded people like myself.

I was a happy eater. Until one day I wasn’t. My mindset had shifted. I began to resent my food choices, but I took no responsibility for them. My idea of a solution would just be to drive to different petrol stations to avoid the judgement of the cashiers. I would lower my eyes to escape the critical glances of others regarding my appearance. I would eat those crisps and chocolates in secret where I could avoid the gaze of people questioning my food choices. My relationship with food had begun to spiral out of control.

By the time I had decided to start exercising it is fair to say I had developed some form of dysfunction regarding exercise and eating. Exercise was ultimately a way to balance the scales when it came to my food choices. Burn 1000 calories, eat 1000 calories, simple. I had no real goals, gym was just that chore I did one hour a day, three days a week.

People are quick to knock wellness programs, cynically labelling them as easy ways to extract further value from an insurance company’s clients, but in truth that was what kick-started my drive to feel better about myself. I went for assessments and the reality was there on paper for my analytical mind to interpret: I was overweight with a high, albeit not completely unacceptable body fat percentage. I was making poor nutritional choices and my BMI was in the ‘pre-obese’ range. I made my focus to accumulate as many points as possible to improve my status in the wellness program. This meant more regular sessions in the gym and signing up for ‘those’ walk events and eventually 10 and 21km runs. Somewhere in this I fell in love with the post exercise endorphins, elated in the knowledge that I was en route to a gold status and that I knew that any treat I ate I had ‘earned’.

I arrived in Cape Town at a healthier 74kg, no longer pre-obese and with a mild enjoyment for exercise. Roark was a good fit for me, I respond well to a supportive culture and James had in the four months that Roark was open, established a culture where everyone was striving to be the best version of themselves and the coaching and interaction was set up to facilitate that.

Unfortunately, my move to Cape Town also meant I was living less than a kilometre away from the holy grail of all petrol station convenience stores – the Woolworths on Main road in Claremont. It is fair to say I was responsible for any chuckles and mini-doughnut shortages they may have experienced. I always coupled these binges with a little verbal self-flagellation. All in all, I’d say I was still maintaining a healthy relationship with food.

While it became simpler to give my best in the gym by turning up and being consistent, the battle with food seemed to only get more challenging. It wasn’t even that I would have been considered overweight, I just had a very negative view of my body and that psychological weight was crushing. The result of which meant I was seeking extreme solutions, one of which was counting and restricting my calories to 1200cals a day, coupled with a poor implementation of intermittent fasting. No surprises this barely lasted into the second week.

I can’t pinpoint where or when it changed, but my focus shifted. I began to interrogate my goals. Honestly up to that that point my goals were primarily aesthetic. I wanted to look like a men’s magazine cover guy. Sincerely though who doesn’t, they are lean, healthy and athletic. What we are not aware of is the hard work and sacrifice it takes. I made a conscious choice to reprioritise. I would redefine my goals. I chose to put performance before aesthetics. I started to think about food as fuel, fuel to power improvement.

What I hadn’t consciously realised is that training at Roark had prepared me for the challenge of improving my eating and the negative relationship I had developed with food, just as it had transformed what I thought my body was capable of. In the course of training at Roark I had learnt to break everything down into smaller pieces of work, hiding the volume of what I was trying to achieve by making my goals smaller and progressing towards them incrementally. This approach has also served me well in events like Cape Town’s iconic Three Peaks Challenge and the self-inflicted Two Oceans two day “stage race”- where I participated in the trail run and the half marathon.

It would be easy to lie and say that all it took was this realisation. It didn’t. It takes mindfulness each day and regular reminders of what it is I desire. I’ve surrounded myself with people who are supportive of my goals. I’ve had the good fortune of learning from someone that food is a source of wellness and that we should make choices for that wellness too, even if that means an occasional ‘doughssant’ or a stack of flapjacks.

When my focus shifted to being stronger and better in the gym it liberated me from the number on the scale. I now concentrate my efforts on taking care of my body and supplying it with adequate nutrition to allow myself to pursue the variety of activities which I enjoy. Surprisingly a benefit of this is an aesthetic I am pleased with, a body capable of more than I ever imagined, and a mind that is mostly free from the baggage of a negative body image.